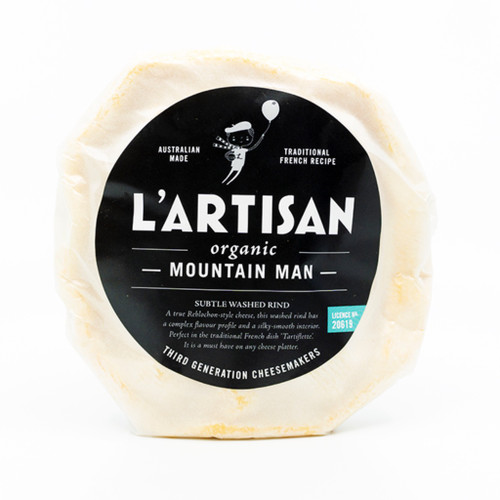 Matthieu Megard grew up in the French Alps surrounded by classic Alpine cheeses. Soon after moving to Australia he set up his own dairy to share the cheeses from his childhood and home country with all of us ‘down under’.

In 2010 L’ Artisan Cheese – Organic was born and today, he produces a range of different styles of cheese, all of which are made by hand using selected Australian organic milk.

As a third generation French cheesemaker, ‘terroir’ is important to Matthieu and so choosing organic milk to allow the best expression of that ‘terroir’ is a crucial step in his cheese making process. Matthieu personally selects the finest organic milk from family owned dairies found in the South West of Victoria – a celebrated dairy region of Australia.This milk is handled with the utmost care at every step of the cheese making process. Everything is done by hand at L’Artisan Cheese – Organic, which means every batch, and every cheese receives very special attention.

Matthieu recreated this washed rind cheese using his family’s traditional recipe for the classic Reblochon de Savoie traditionally made in the Haute Savoie region in the French Alps. The small rounds are regularly washed in brine and then matured. After four weeks they develop a light orange rind with smooth paste and a mild, creamy flavour. Mountain Man is both a great table and melting cheese making it perfect when recreating in Australia the hearty, traditional French potatoe-based dish called ‘Tartiflette’.

*All our cheeses are cut by hand so the weight may vary slightly :)